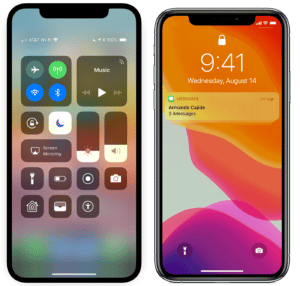 Operating system is the system that makes connection between hardware and software so that they can work together. Now there are lot of operating system you heard. Like in smartphones we have Android OS, iOS etc. Now android and iOS are both different operating system. It means you cannot install Android apk on iPhone or iOS ipa in android. Because the android system only work with apk and same for iPhone.
User interface we can say is just the design. Like if i ask you to draw a dog, then some may draw very simple and some may draw very eyecatching. Now in same way in mobiles user interface is just the design. Everything you see on screen is same on all smartphones but just the design is new. This designed by people of different companies, so the user interface is always changed but OS never changes.
Like in android if you will see redmi, realme, oppo, vivo all are android but all have different user interface. So similarly the iOS user interface is also different. Now installing iOS Rom in android changes android user interface with iPhone user interface. This way you gets all the apps of iPhone in same way iPhone has and all the features that iPhone have. But still you are on android so you have to install playstore.

How to install iOS rom in android

Now if you install iOS rom on android then you can use every iOS app. To install ios rom you phone must be rooted and have twrp recovery installed. Now if you don’t know how to install twrp recovery and how to root phone then you should follow these steps. To install twrp recovery just follow this guide and if you have different phone then Redmi Note 5 pro then read this guide with all steps. I have provided how to install for all phones.
How to Install TWRP Recovery in Redmi Note 5 Pro

This is really not recommended because rooting your phone may loose warranty and your phone will be open to hackers. Only recommended for developers in this field. Also it may damage devices so don’t install if you are not a android developer.

Now your phone is rooted and you have TWRP installed. So now you need to download the iOS Rom file. The iOS rom file is not available for all phones. Because only developers make these files and they are not ready for all. You first need to search for your files.

Now you can see i have found iOS file in first search. So if you will find also for your phone then you can install it. But if you will not to find then you cannot install. This rom is also available for many phones but not available for all phones.
Now if you will find the rom then download the rom and just install the rom using twrp recovery. Now install and you will get the iOS on android. This is the simplest way to install iOS rom on android and if you want you have to follow the steps. Again if you are not able to understand then don’t do it. Because you may damage your device. But still you want to do it then do these things.